Yesterday was a pretty full day.

We got the tail end of cyclone Ita which caused chaos throughout the North Island. I’d planned to spend the morning visiting friends, but traffic was at a standstill, and the prospect of crossing the motorway turned out to be well and truly in the too hard basket after school drop off, so I took shelter in a local mall instead. 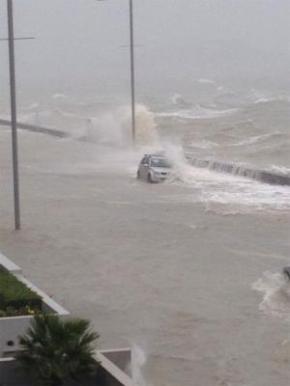 Met my long-suffering husband. No problem finding a park, as most people either had the sense to stay indoors or were stuck in the chaos on the roads trying to get on with their day.

Thousands of Aucklanders’ days were thrust into chaos. Power outages, road closures, downed trees, flooding and even flying roofs meant some people got an extra day off before the Easter weekend officially kicked in.

This guy is in good spirits considering. This was posted yesterday on the More FM website according to the image gallery I found it.

Breakfast was ordered and plans were hatched for the day. Steve would get a squish (massage) while I’d do a spot of shopping and waddling around the mall. He planted a passionate snog on me before taking his leave, which was a very nice reminder that he likes me, despite the fact I have been absolutely insufferable recently.

We agreed we would have to go shopping for gifts “from the baby” to bring along to the hospital and present to the children in conjunction with introductions to their little brother.

It is a thing we do. The biggest helping of attention will be heaped on Adam, as we are often reminded that he’s a hand-me-down kid and rarely gets anything new and has always more or less had to slot in with what everyone else is doing. The upside of this is that he’s not spoiled or entitled, and appreciates every gesture and gift he receives with such earnest it melts my heart. The downside is, we have far less patience with him than we did with his siblings, and sometimes forget to tolerate him like the three year old that he is, and expect far more from him that might be reasonable. He’s seems to be turning out alright, despite our many parental failings though. So fingers crossed he grows up to be a good, kind and engaged human. Time will tell.

I squeezed in some retail therapy. Lost count of the number of people who looked at me and said something along the lines of: “Not long to go now!” or “Oh my, you look just about ready to pop” and happily received few strangers’ belly rubs while explaining that the induction was now only a week away.

Oh, also managed to catch up with my Canadian friend Leigh as she was down from the Hibiscus Coast for an appointment on the Shore, so stopped in and treated me to tea and muffin while Grumpy was getting a squish (massage) at the Chinese kiosk downstairs. It was nice to have some one on one time with her.

We wrapped up, Steve popped in just long enough to subject Leigh to his usual lascivious groping session (reserved for pre-cleared and previously screened friends, as he does actually respect boundaries, and there are plenty of our friends that he’s quite a gentleman around) before we headed over to the toy store together.

The plan was to get Adam one of those motorized plastic jeeps or something equally OTT. That plan didn’t pan out. We ended up getting him a baby doll complete with carrier and pram. So Adam will be able to care for his baby while we care for James. Luckily he’s a big fan of pink, because let me tell you, gender biases are alive and well here in New Zealand’s retail toy industry, and all the baby stuff was geared towards girls.

We then went our separate ways again.  He went home to work on his latest project, and I stayed out to finish up some rare retail therapy as I hardly ever shop these days.

I also made a short detour to the pet store where I failed to purchase a miniature maltese puppy as it had been claimed by another family the day before.  Here is a picture of the puppy that wasn’t meant to be a part of the West family.

Bought some supplies for the house, and was served by a lovely (and very handsome) young man.

He had a long verse tattooed on his lower arm. I can’t recall exactly what it said, or who he attributed it to. Some Persian poet. The gist of the phrase was Carpe Diem, but be respectful as you go about Carpe-ing your Diems. He then helped me to the car with my purchases, and a really great conversation on religion ensued.

“So I take it you aren’t Islamic, seeing as you have quite a bit of ink.” I said to him.

“Well, I am Muslim, but not hardcore or anything” He explained.

“Ah, kinda like I’m Christian, but not super OTT or anything I guess. My husband is Atheist. He thinks it is ridiculous that I believe in something bigger. But seriously, it is way too amazing that all of our major religions pretty much say the same stuff. There must be something more. Just so messed up that it is the source of so much hatred and crazy, when the messages are actually really good – tolerance, grace, Love, all that great stuff! Religion can be so nuts” I continued.

“Exactly. The really hardcore types can be a bit intense. I mean, I eat bacon, but I still respect Islam. Maybe when I’m older I’ll get more religious. That seems to happen.” He said nonchalantly as we walked to the car on the now clear blue-sky day.

“Yeah, my dad is ordained in the Anglican Church, but he’s not pushy. It is really quite cool that the kids get to decide. I have one Atheist and two believers so far. And the bacon thing, I totally get! Heaps of our Jewish friends love a good bacon cheeseburger.” I laughed.

And we wished each other well. I got in the van, swung by daycare and school to collect the children and headed home to unpack the family and my purchases.

Arrived home greeted by Grumpy getting ready to head into the office for some drinks and pick up some packages.

He left, I napped.

Woke up a couple of hours later and called my friend Anna about picking her up for the Ugly Kid Joe and Skid Row concert we were going to that night.

I picked her up after 7:00 and we made our way up to the top of Mt. Eden to get a good look at the moon as it was extra beautiful this evening. I was surprised that she’d never been up to the top before. I’d been there quite literally hundreds of times. She’d even lived in the area for some time as a child, but with 5 other siblings, car trips to the top of Mt. Eden were a logistical impossibility. She’s had a very different life journey than I have. I just get on and do absolutely anything that catches my fancy, without too much planning or forethought, as things generally just seem to fall more or less into place and resources become available how and when they are needed, and always have done one way or another.

Her experiences are such, that flying off footloose and fancy-free wasn’t ever much of an option for her. While I was in my late teens and early 20’s, poor as a pauper, I still managed to embark on so many adventures and see amazing things. The same time as I was off road tripping on a shoe-string budget, or nightclubbing on K-Road, she was managing a young family as she had her first daughter when she had just turned 17.

A few years back, Anna went back to school and got qualified as a professional medical practitioner in midwifery.

I can’t begin to explain how cool it is that I have a friend who I like going to concerts with, who is also a trained midwife. Very advisable to bring your own midwife if you are going to attend a hair-band concert in your ninth month of pregnancy. Anna was great fun. She ensured I was always topped up with soda water and kept guard over my spot on the couch during one of my frequent bathroom breaks.

She also managed to introduce herself to the other obviously pregnant lady at the concert who came over to say hi and we got this picture.

I wasn’t the only pregnant lady at the concert!

There was a very nice bouncer lady who was stationed at the toilets, and we got to talking. She’d had four children, lost one and was now dealing with a 20 something year old daughter who was struggling with drugs and gambling issues. So when it came time to leave (after Skid Row played I Remember You) I gave her big hugs and we wished each other well. Anna laughed.

“How do you even DO THAT!” She chortled. “You didn’t take any longer than a normal person going to pee, and yet you managed to get yet another complete stranger to open up to you about all of that. At a concert. Outside the loo. You’re kind of a freak you know.” Anna said affectionately.

Such heartfelt compliments are rarely so gratefully received. I am a freak. And I hope to stay freakishly friendly until the day I draw my last breath. And oh how I adore strangers!

There isn’t much in the world I enjoy as much as reaching out to someone who just wants to connect. And my fickle and unreliable nature lends itself to successful relationships with strangers, even if it proves to be a challenge sometimes when tackling deeper and more meaningful relationships. Some people find me insufferable. And that’s okay.  The older I get the less time I have for the vast majority of people as well.  Time just gets more precious.  But strangers, I think I will probably always find time to reach out very actively to strangers.