So Grumpy has begun second-guessed our naming decisions. He just recently declared that our son is a Matthew, and not, as previously thought, a James (Jamie, Jimmy, or Jim). Sigh. 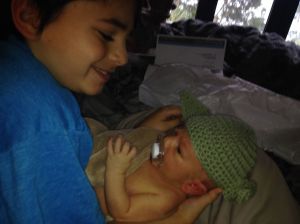 Daniel and his wee baby brother in his FABULOUS Yoda hat. Thanks Greta. Love that we have beautiful talented friends like you guys who aren’t afraid to geek out! Perfection!

First FIRST thing in the morning, Steph decided to do a selfie with us. We co-sleep with baby James, so this is where and how he spends most of his life for the first few weeks, snuggled up between us in our big comfy bed. These moments are so fleeting, and I can feel them slipping by so fast. Perhaps we’er going to need to have a fifth?

We haven’t registered the birth yet, as we have a few weeks’ grace before our next overseas trip. We named our second son Jonathan Adam Xander West, all perfectly awesome names, with the fringe benefit of the initials JAX (-son). Alas, none of this stuck, and we later decided he was simply an Adam. He is. He really is an Adam. Cheeky and funny and so much like my “Canadian baby brother” Adam who shares his name. And that’s cool with me. He’s grown up to be a very good man indeed. However, the whole ordeal has indeed left us a bit gun shy in the naming department, as we’re now stuck with the nuisance of changing his name at the Births Deaths and Marriages registrar. Paperwork. Hate it. 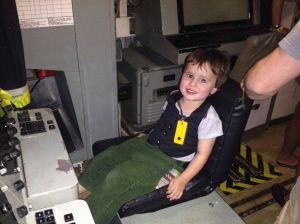 This is our wee man Adam (AKA Batman) in submarine in Sydney harbour on a recent trip to Sydney. 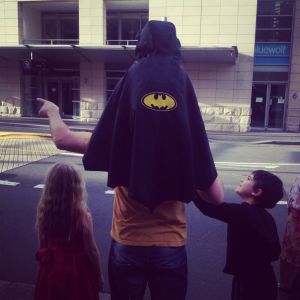 And here is Adam perched atop his father’s shoulders. It is about his favourite place on earth. The cape started off as Daniel’s, but nobody contests the fact it is very much Adam’s now. He wears it to the zoo, the mall, daycare, you name it. And when it is on, he’s quite convinced he is invincible.

It is kind of a big deal though, picking a name. I even found an article from a few weeks back where the correlated the statistical probability of your child attending oxford based on a collection of some of the most popular names in Britain at the moment.  Generally, the name that is chosen for you, you are saddled with forever. It affects everything you do, from job applications, to dating, to where in the queue you fall during role-call at school if they are prone to line you up alphabetically. Names make a difference. If you are stuck with a particularly quirky name, some believe there is a definitive correlation with your future career prospects and life choices. Of course having a particularly ethnic name can be an advantage in one country while creating obstacles for the person in another. The name Jesus (prounounced in Latin America as Hey-Zuess – excuse the spelling – but that is always how I visualize it) is very popular in Latin American culture, and would be quite ill received somewhere like New Zealand or Australia. There are thousands of examples of names losing something in translation, oh THE PRESSURE!!!

I have trouble finding examples of what I am saying without offending someone somewhere unnecessarily. My husband, who is less concerned with offending people, often pipes up with his opinion on names. Some of the gems he’s come up with include:

–      “They’re going to grow up either a bully or severely depressed with a name like that, poor kid!”

He’s graced me with much more colourful takes on people’s names, but I’ll leave it there for now.

In only tenuously related news, I had what could be my last therapy session for quite a while on Monday. As anyone who has been following the blog will know, I got smacked down by a rather extreme case of pre-natal depression. It lasted pretty much throughout the pregnancy. I seriously could not get my head around another child. I have never responded well to medication, so diet, exercise, and finding a therapist who specialized in PND (Pre and Post-Natal Depression) was the treatment we chose. My midwife was concerned enough to put me forward for support in the public health sector, however, I felt it was reasonable not to take up resources in that sector when we could afford our own treatment. So I got quite a nice therapist, whom it took me a couple of sessions to warm up to, as she seemed a bit young at first. She, along with the several other mental health professionals we have dealt with in a professional capacity assure me that I am far less crazy than I keep declaring I am, owing in no small part to being quite self aware of the good and bad parts of my personality and self in general. Cognitive dissonance is kept at bay and I check myself regularly and am painfully honest with myself and the people around me about the things I feel, do and say. Sometimes this works really well. Sometimes it has disastrous consequences. But I am what I am. And apparently, I am more or less sane. For the time being at least.

So James is here now, and I am head over heels in Love with him. The only signs of insanity now being, both Grumpy and I are kind of discussing going one more round on the breeding front. I hope we come to our senses soon, as I reckon five children is just a bit ridiculous really. So is four for that matter. But we’ve done it now. And aside from the sleep deprivation, feeling of complete and continuous chaos, the increased financial, mental, physical, emotional, and general pressures we’re now subject to, we’re doing alright I think. 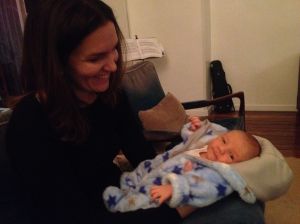 This is James at four days old with one of my very favourite people on the planet. I’ll not publish her name though, as she’s far more online shy than I am. Love her to bits though, and glad she got to meet him when he was still nice and fresh!

OH! And I was going to tell you about my night out! Friday was fantastic! I had no idea what was in store, just that Grumpy had a freezer full of milk and I was given a large window to be a person rather than a lactation receptacle.   I got a last minute invite to a very swish and exclusive MTV party from an absolutely amazing and beautiful woman. Jumped at the opportunity, and although I felt completely out of place until I bumped into my friend, it was very interesting. I brought a couple of gorgeous girlfriends with me, who were younger and better dressed than I, and also had not just given birth 10 days earlier. They were much better at handling the huge crowd of “beautiful” people. They also very kindly whisked me away for a bit to a tapas bar up the road that was populated by people in their 30’s and 40’s, and not a bunch of tight 20-somethings. It was at this bar we met a lovely woman named Simone who was in NZ for training at Les Mills for some sort of fantastic yoga/meditation/exercise program thing. I am not a health buff, but she was absolutely sweet and lovely and all on her own in our gorgeous city, so the girls and I decided to bring her along with us for the remainder of the evening’s adventures. 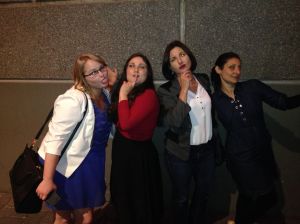 We finished up at the magnificent MTV party at around 9:30 and made our way up to Kingland for a friend’s 40th. I admit to being well sozzled by the time we arrived here. Sang showtunes in the cab all the way to our destination, and the cab driver was very gracious and told us we had lovely voices. I got some of it on my iPhone, and you know what, it wasn’t too bad!

Grumpy arrived just before 11:00pm with the baby and hung about for an hour or so while I continued to annoy strangers with my views on life, love, politics, the environment, the universe and everything. Going out every couple of years is more than enough for this OTT Hobbit. And I can safely say I feel sated for a while in this department. Will look forward to smaller, quieter dinners with friends from here on in. Grumpy will be heading into work most Fridays and that means I can deliver him the baby at the end of the day and have a standing drinks date. I ended up throwing close to a litre of tainted milk down the drain and didn’t have to feed the wee man for 14 hours to be super safe while the booze left my system. It was nice. But it was also nice to get back to the regular swing of things and feed the boy directly again. 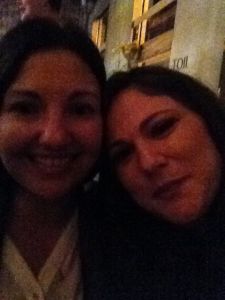 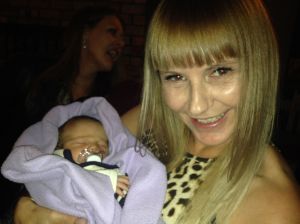 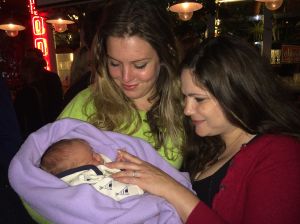 A very gorgeous stranger grabbing a cuddle. We lost count of all the people who met James that night… He LOVED the noise as there was a rugby game on and heaps of yelling and cheering. Similar decibel level to our house I suppose? 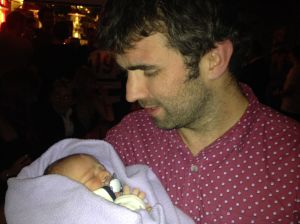 This lovely Scottish lad is expecting his first baby in August. This was the first time he held a newborn. Cool eh! 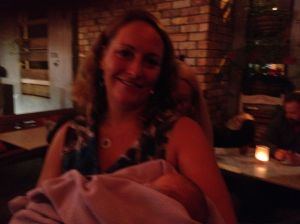 I’ll leave it there for now, as my Thames Mum and Dad are heading over with my gorgeous nephew who has just become a big brother! My youngest Kiwi sister gave birth on Monday to another gorgeous wee man and is at home bonding with him as we speak. Could be a few weeks before they are ready to accept visitors with the newest member of the family, but I am VERY excited to see the older brother and his stunning grandparents in a few minutes! Best get in the shower! And then we’re off to Wellington. There will be blog or three in that adventure I assure you.

One thought on “What’s in a Name? Also Feeling Decidedly Sane :-)”