I’ve helped raise four incredibly LOUD, frequently hilarious, occasionally dry-humoured, and undeniably small humans. They didn’t stand much of a chance in the size department, when you take into account our family’s Hobbit-like stature.

This past few weeks the three eldest children have come to me at various points offering me teeth. Seems to be a spate of baby teeth making their way into my palm. Eldest is losing molars, while the 6 year old is finally catching up and dropping his baby teeth.

Sunday, we took them to Yum Char, and between major meltdowns, tears over a lack of cranberry juice (they had apple juice FFS! Please chill out!), and hiking 15 blocks with the baby (who isn’t a baby so much, as a 2 ½ year old noise making, play-by-play breaking lump of cute that insists on being carried everywhere) to get some Panadol™ suspension liquid, I guess we had an okay brunch?

There was no blood shed, or black eyes, and no one puked on the table, so all in all, I’ve had much worse meals with any number of my children.

After saying goodbye to the friends we invited that I did not get to speak with, we took the kids to the amazing new park in Takapuna that you’ve all heard of. It would seem that most of you were also there over the weekend, as about half of Greenhithe and certainly a good chunk of the greater North Shore area was at the beach and zero parking was available. 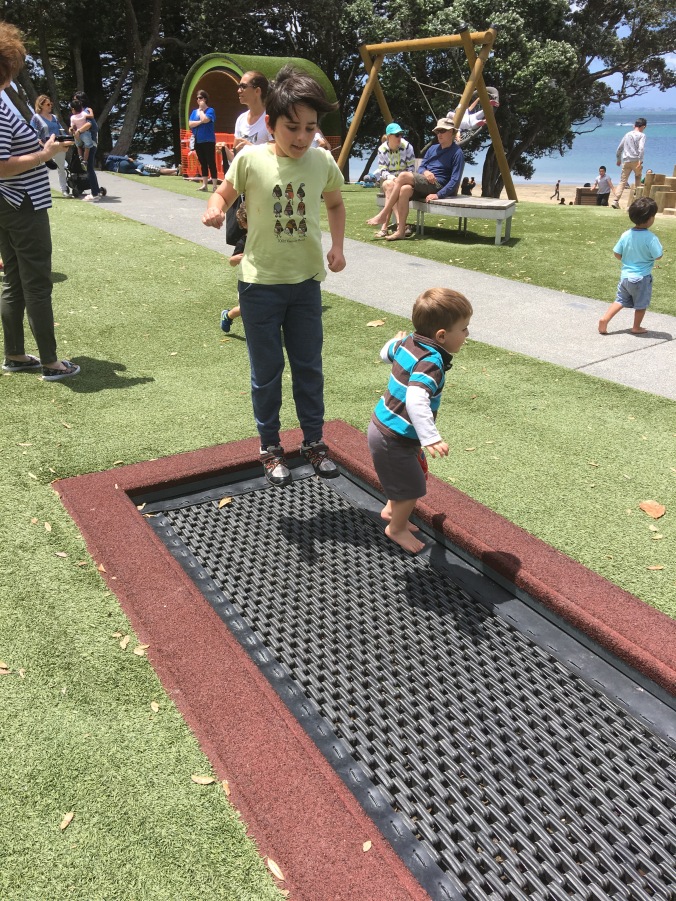 The park plan went fairly well. Children split off into groups. Steph of course found friends, and Adam went comfortably into the “red zone” for a good 10 minutes. The park is a fairly decent place for him to have a meltdown as it is safe for him to stomp around for a bit, and he can hide under trees and things, and it is generally pretty easy to find and retrieve him if need be. As long as he is in no way endangering himself or others, I am a pretty happy camper when it comes to my passionate middle child. I crave a decisive diagnosis for him, as he spends so much of his life angry and anxious, the kind and empathetic Adam only gets to hang out and be adored occasionally. I know that the kinder, gentler and less anxious Adam really likes the bridges he builds with people. Sigh. That kid breaks my heart and fills it up and I adore him… and he exhausts me.

Speaking of exhausted, James fell asleep in the car on the way home. Love when they do that. Phteven delivered him to bed where he had a fabulous four hour extended nap. So GUESS what we did? Any parent could easily decipher our plan… We also had a nap. Naps. Are. Fabulous.

Later, after waking up, I ventured out with Steph who was incredibly tween-like and difficult throughout our errand-running voyage to Glenfield. Seriously, she has turned into a teenager and I can’t say I like it or feel ready for any of the adventures that could lie ahead of us if my own difficult youth are any indication of what is in store… Eep. 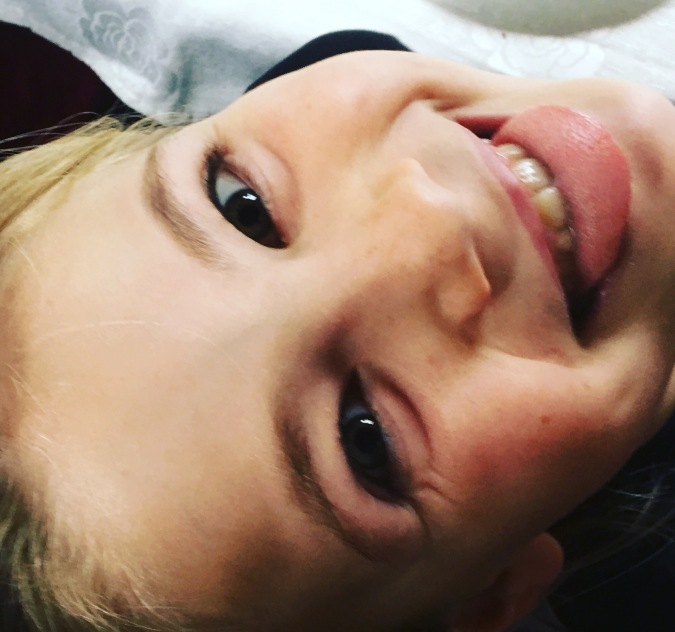 So I got home, fed the troops, and tidied up a bit in the hopes of convincing our long suffering Lou not to quit on us. She performs miracles with the children and our house every week, and I can honestly say she’s irreplaceable. 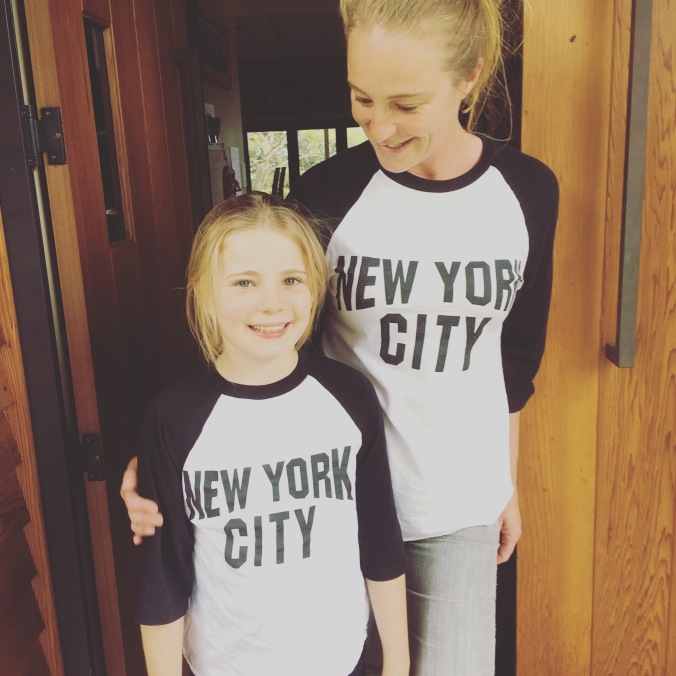 After feeding them, and literally throwing some Christmas lights around the place, I was grabbing an ice water from the fridge, and my soul mate Phteven trudged into the kitchen after being on the trampoline with the kids for a spell. He’s pretty old, and a bit rounder than his usual self these days, so escapades on the stretched canvas with our bendy and boundless babes is often enough to wear the forty-something-year-old-fella out.

There was a look on his face that every parent knows. It is a look that can only be described as exhausted, anxious, incredulous, and complete contentment, with a dash of “what was I THINKING!” thrown in for good measure. 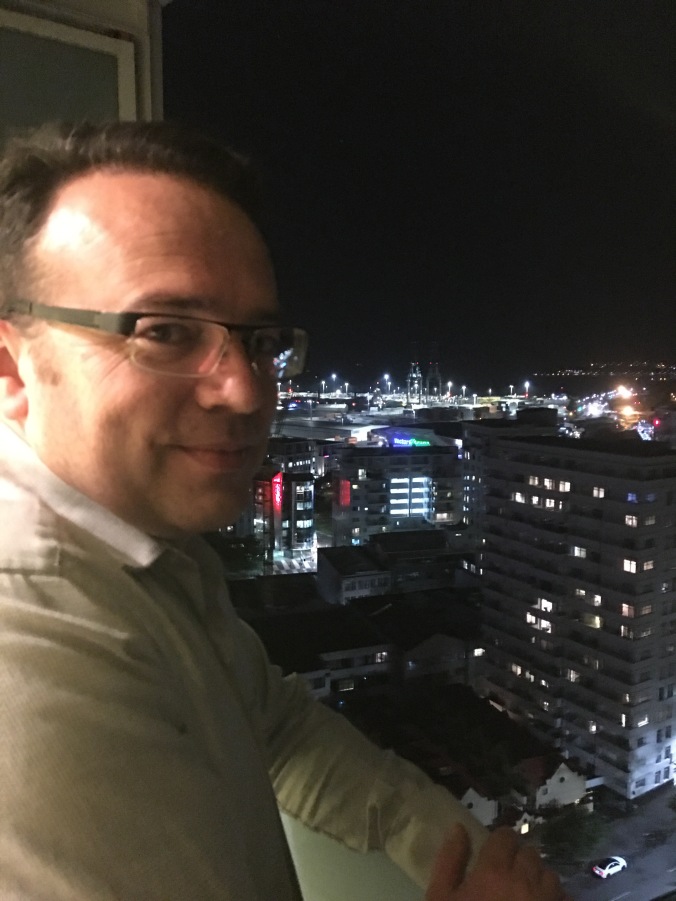 Anyway, this look on his face solicited only one reaction, I threw my arms around him and laughed so hard my sides and face hurt.

The truth is, we have an amazing level of help and scaffolding around us in the form of friends, family and even people we employ who help us raise our quirky kids. The weekends remind us how much we appreciate and rely on all the many people who are helping us to shape the hearts and minds of our four fabulous offspring.

So, now, I shall go and turn the television off, shuffle the kids to their rooms after brushing their teeth, and have a long, hot bath. BY MYSELF! Because this weekend, even necessary bathroom breaks did not occur without constant interruptions.

After my bath, I’ll be up half the night doing the work I’ve neglected for the past three days, because I’ve been wrapped up in the cozy reality I’ve gone and built for myself, with four quirky kids, and a long suffering Phteven. They all drive me nuts, and I occasionally dream of running away somewhere peaceful where the only person I need concern myself with is ME!!!!… Then I stop, and look around at the chaos and the Love and the secure sense of belonging I get to share with my family and anyone who steps foot in this house, and I realize that things are fairly fine just as they are.

Hope you had a great weekend.

Thank you for reading.

One thought on “Yum Char Too Far!”