Does anyone else remember that song from the 80’s?  “I wanna be a Cowboy… and you can be my cowgirl…”

It was a decently benign song with a bit of cheek.  Kinda sums up how I feel about the Stampede, which is equally benign to me, yet very, VERY important to the locals here.

We have arrived in Calgary and the whole city is awash with Stampede fever.  11 years of residency in Alberta, and 1-4 visits back to my homeland per year and yet I have never attended the rodeo based festivities. 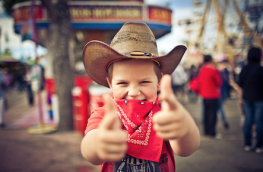 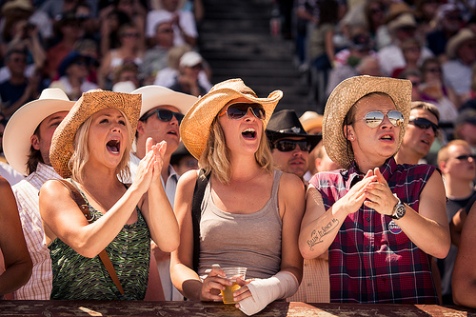 We all grow into our own kind of people.  The four feral children I have with me are more interested in family visits and hikes in the mountains than they are in crowds and carnival atmosphere.  I metaphorically beat them into this since birth, with indoctrination about nature trumping anything manmade and crowds causing panic attacks (which they do, for me).  So, we are all on the same page.  The kids are sneaking in a swim and we will head over to the NorthWest of this growing city to see Grammy Karen and Uncle Darcy, and later, the rest of the McGregor clan who are as much a part of me and the kids as any family we’ve chosen in New Zealand.

There will be no trip to Stampede for any of us.  We get to soak up a bit of the atmosphere as hospitality staff around the whole city are crammed into Western apparel and donning hats, chaps, boots, plaid and painted on jeans.

I’ve basically nothing against this culture, aside from concerns of animal exploitation.  These concerns would quickly be attacked (and likely not defended on my side, because I adore a good argument, but only when it won’t do permanent damage to a relationship) by any number of family or friends who grew up and remain entrenched in this wild, wild, west whirlwind of ten gallon hats, cowboy boots, and magnificent manners.

This atmosphere of Western wonder would surely confound most of my dearest friends in the Antipodes.  This is the sort of thing you see on movie screens and travel documentaries about Western Canada and maybe Colorado and some other Midwestern states.  The earnest with which this all plays out here is probably the most interesting part of the whole thing to me.  This is taken no less seriously than mulled wine and hand made decorations at the Christmas markets in Munich, or Waiata and Haka during Matariki at home.  People here wait all year for this boost to morale and the local economy.  Tourists pour in from around the globe to see the wagon races and go line dancing and two stepping at Cowboys.

So, as I usher my four feral humans out of the pool and back up to the room to prepare for the next leg of our adventure (a trip over to the NorthWest and a BBQ at Auntie Christy and Uncle Rex’s place tonight) I will maneuver my way through countless Stampede-esque displays and spectacles.  I will tip my non-existent hat to traditions, and carry on with the life and personality I have grown into as an environmental activist and a patent eccentric, and I will take my children far into the mountains to visit some of my oldest friends, before heading north to face the demons of my youth as I do a couple of times most years.

Thank you so much for reading.